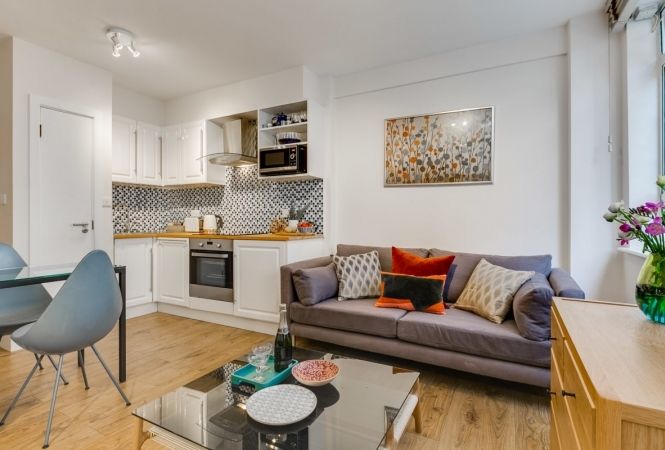 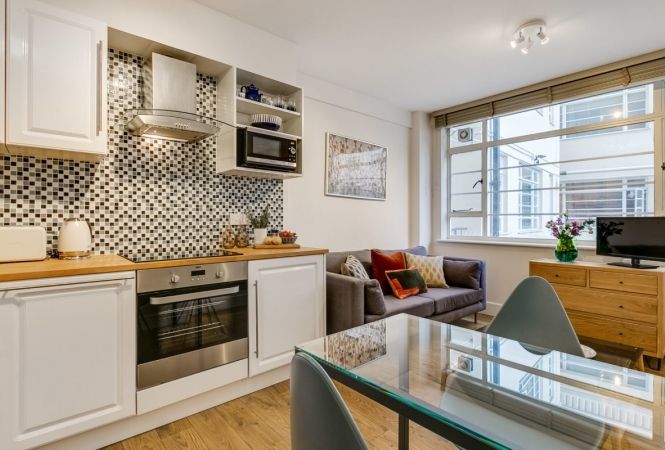 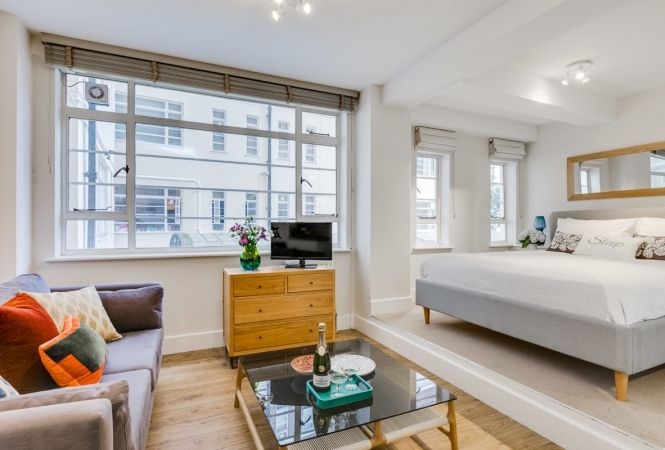 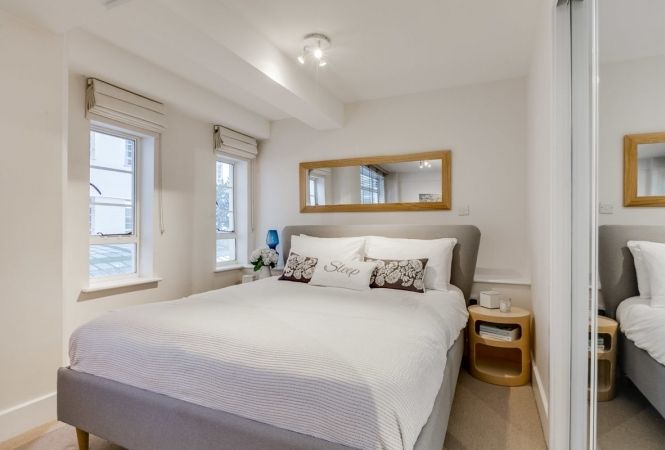 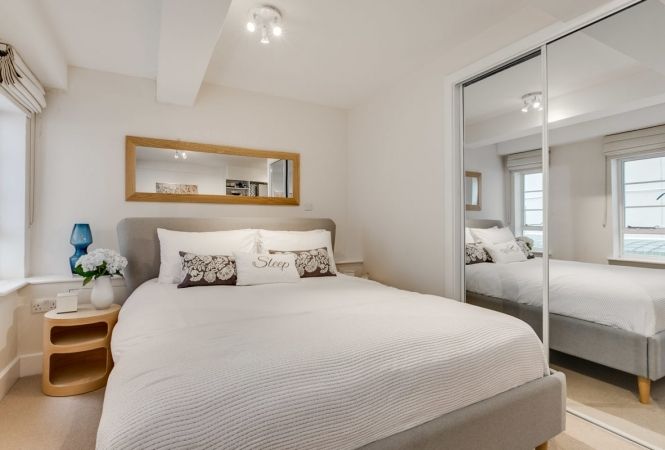 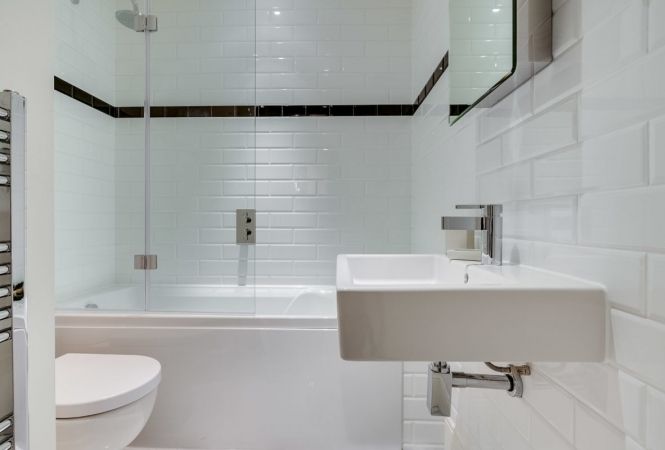 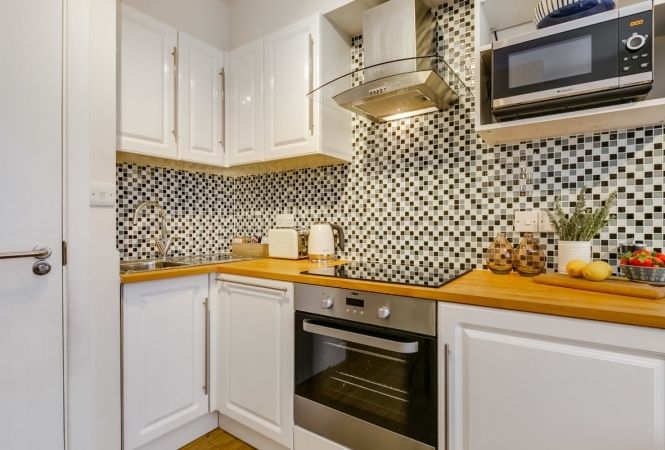 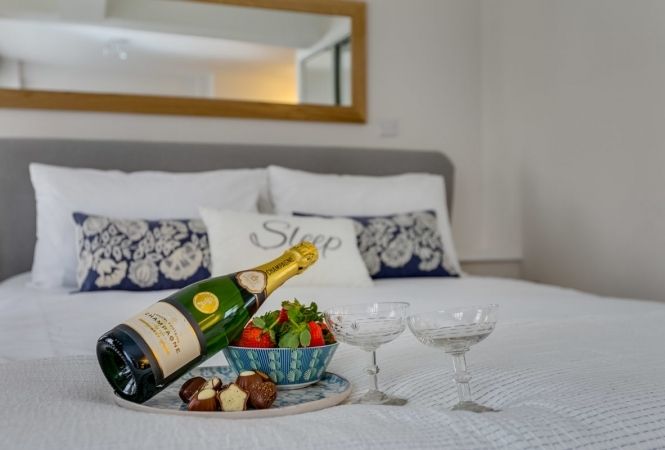 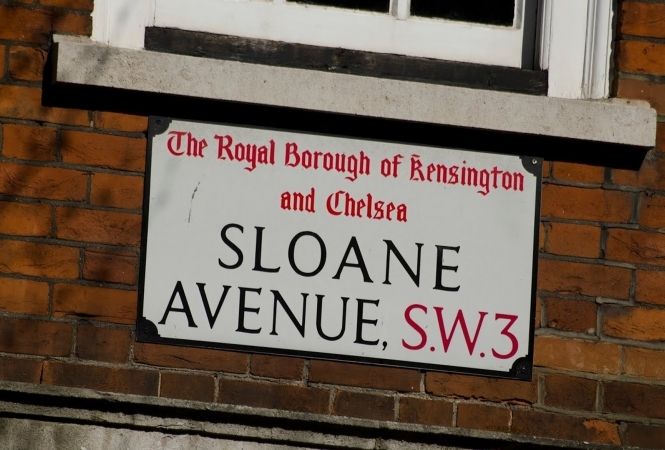 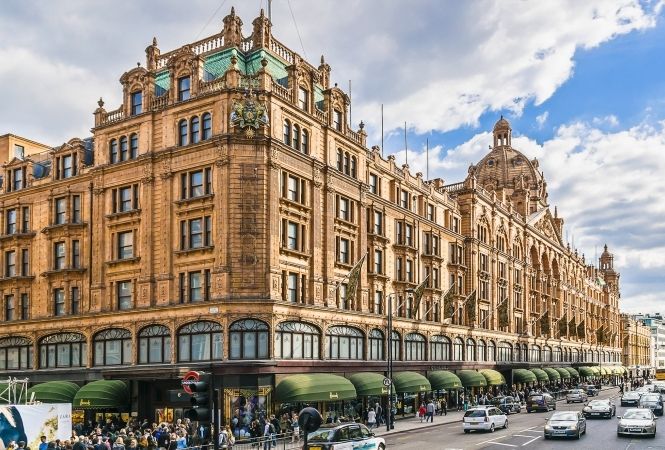 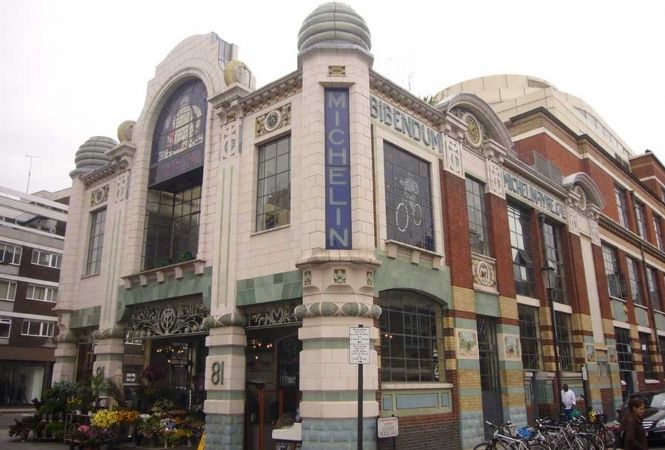 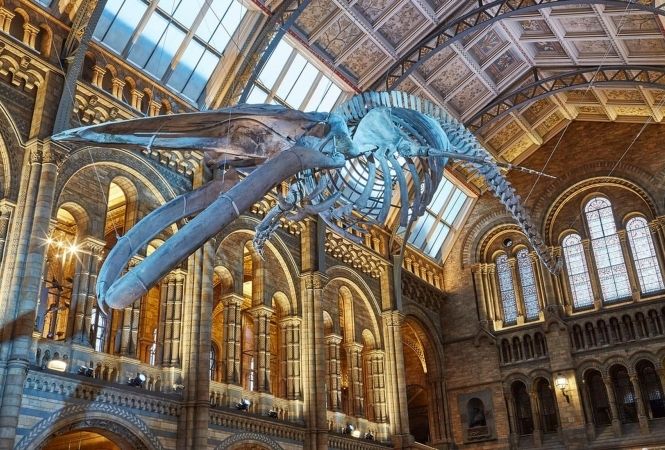 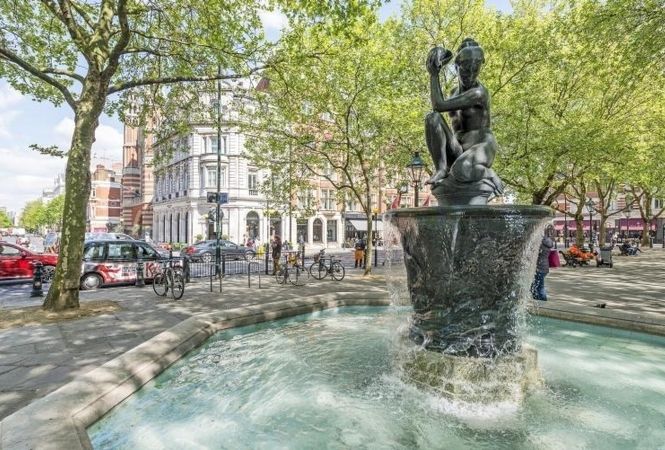 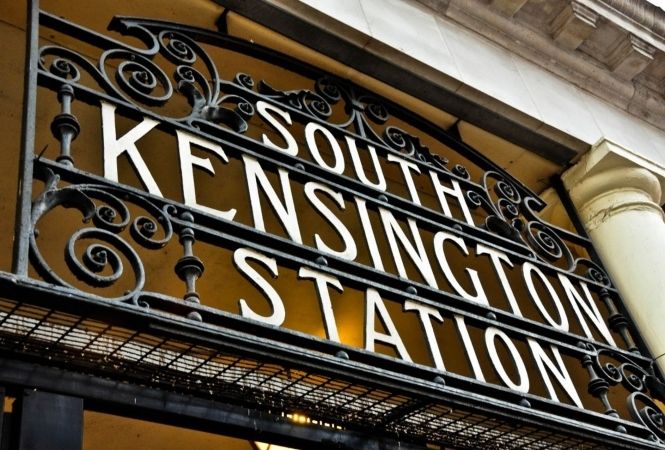 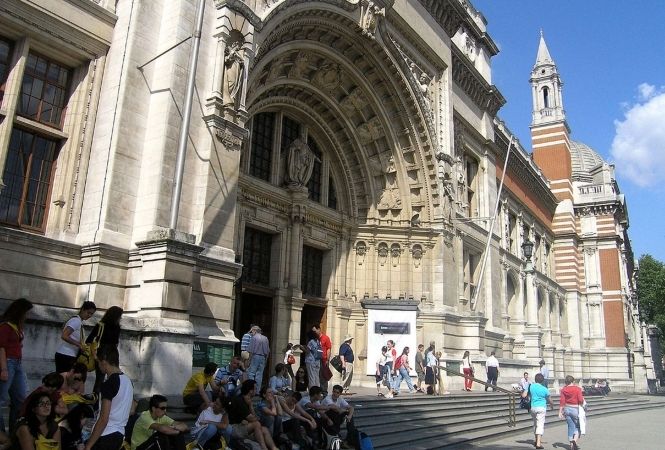 This delightful and stylish ground floor Chelsea studio apartment sleeping two guests is a popular choice for short term lettings and vacation rentals. The owners have spent much time and thought following a refurbishment to ensure that this apartment is perfect for discerning visitors. From the tasteful decor, mood lighting and accessories to the high end-kitchen appliances, stunning new bathroom with a bath and overhead shower and comfy king sized bed with the finest Egyptian bed linen, apartment 26 is sure to please. Free unlimited 100mb wifi is available as standard and allows uninterrupted browsing.

Free unlimited super fast 100mb WiFi is included in the rental price along with a complimentary welcome pack containing toiletries, milk, sugar, coffee and single estate teas. A weekly 2 hour clean is  also included along with a change of the Egyptian cotton bed linen and towels. A daily maid service and additional towels can be arranged with us for a minimal surcharge at the time of booking as an “add on” or during your stay.

Located on Sloane Avenue in one of the most prestigious locations in London, explore the cultural highlights of the area including cutting edge theatre in Sloane Square at The Royal Court, view contemporary art at The Saatchi gallery and view thousands of exhibits at the natural History, Victoria and Albert and Science museums in nearby South Kensington. With tubes a short 8 minute walk away, the whole of London is at your doorstep.

How to get there:
By plane, the closest airport is Heathrow. Either take the Heathrow Express to Paddington station and take a taxi, the journey will take 20 minutes or take the tube (Piccadilly line) to South Kensington station, which is then a 5 minute taxi ride or a 10 minute walk.

Another alternative is Gatwick airport. The Gatwick Express brings you directly to Victoria station, the taxi ride to Nell Gwynn House will take 10 minutes. Alternatively, you can go on the tube at Victoria, take the district or circle line to South Kensington or Sloane Square, the taxi ride will be 5 minutes long or a 10 minute walk.

From Sloane Square tube, walk straight down the Kings Road with Peter Jones department store on your right. Cross the road and after 5 minutes you will see Andersen Street on your right. Head down Andersen Street, this becomes Sloane Avenue. Continue down Sloane Avenue and you will see Nell Gwynn House on the right hand side of the road. This will take between 5 and 10 minutes depending on your speed of walking.

From South Kensington tube, come out of the station and turn left onto Pelham Street. Keep walking, continuing over the pedestrian crossings into Sloane Avenue. Nell Gwynn House is on the left side of the road. This will take between 5 minutes depending on your speed of walking.

By train, take the Eurostar at St Pancras International station, the taxi ride will take 20 minutes to the property.

Enjoy strolling through the neighbourhood to nearby Museum Row - home to the Natural History Museum, fabulous decorative arts collections at the Victoria & Albert Museum, the Science Museum and more. You'll be just moments from Fulham Road, famous for antique and home design shops, as well as trendy London shopping at Brompton Cross. Walk to King's Road in Chelsea, Harrods famous department store in Knightsbridge and the beautiful Kensington Gardens. Just a few minutes walk away is the South Kensington Tube station, so you can easily reach all the top spots in central London on the Underground or on London's classic red double-decker buses.

South Kensington:
It is hard to define notional boundaries for South Kensington, but a common definition is the commercial area around the tube station and the adjacent garden squares and streets (such as Thurloe Square, opposite the Victoria and Albert Museum). The smaller neighbourhood around Gloucester Road tube station can also be considered part of South Kensington, as well as the Albertopolis around Exhibition Road, which includes the Natural History Museum, the Science Museum, the Victoria and Albert Museum and Baden-Powell House. Other institutions such as the Royal Albert Hall, Imperial College London, the Royal Geographical Society, the Royal College of Art, the Royal College of Music are within the borough of Westminster, but considered to be in the district. Although the postcode SW7 mainly covers South Kensington, some parts of Knightsbridge also fall under this postcode.

Neighbouring the equally affluent centres of Knightsbridge, Chelsea, and Kensington proper, South Kensington covers some of the most exclusive real estate in the world. It is home to large numbers of French expatriates (mainly employed in the financial City centre), but also Spanish, Italian, American, and Middle-Eastern citizens. A significant French presence is evidenced by the location of the consulate, French High School - a large French secondary school opposite the Natural History Museum - and the French Institute, home to a French cinema. There are also several French bookshops and many cafes in the area.
why this property